On the 1st of each month, we feature a story of someone putting their “Faith & Sweat” into action. This month I profile Jackie Lea Shelley, whose work I discovered through an online blogging challenge earlier this year. Her story inspired me, and I loved her fun, colorful designs. I have unicycle #29 hanging in my office. 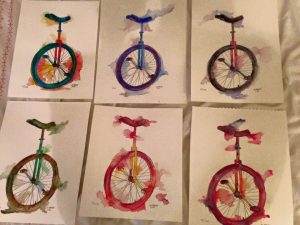 Some people see a unicycle as a symbol of balance, agility, and fun. To Jackie Lea Shelley it became a reason to live – and then a way to give others hope.

Jackie suffers from major depressive disorder, typically which has shown up in the winter, and she says she’s come close to committing suicide at least twice. In one of her darkest times, between the onset of an episode and her ability to start medication, she determined she needed a reason to stay alive – a reason that didn’t involve guilt, responsibility, or shame.

Learning to ride a unicycle became her reason.

Then the unicycle became even more.

In January, Jackie – a portrait artist living in the San Francisco area – decided she would paint 100 unicycles to raise awareness of and money for suicide prevention.

The response has been phenomenal, she says. At first she had trouble keeping up with the demand for the paintings, and the effort also has touched people in ways she never imagined.

“Many friends have come forward to share that they, too, struggle with depression, anxiety, or hidden grief,” she says. “The more I talk openly and without shame about having experienced mental illness firsthand, I feel like the more it gives others freedom to speak openly and maybe seek treatment, which is my real goal.”

One friend posted a picture of his unicycle painting on Twitter, and a woman asked about it. He told her the story behind it, and she went to the 100unicycles.com site and bought one right away. The woman’s sister had committed suicide.

“Another time I was at a social event and I told a woman about my project, and it turned out that she had lost both of her children to suicide,” Jackie says. “I hear these stories every day now, but instead of being depressing it’s actually been quite moving. The need to tell these stories and be able to share our pain and heal is very overwhelming.”

When Jackie first came up with the idea to paint 100 unicycles, she excitedly told her mother, who at first questioned who would buy them. Then Jackie shared her excitement with a close friend, who had connected her to San Francisco Suicide Prevention, where he had volunteered on the phone hotline for more than a year. He suggested painting just ONE really good unicycle and making prints of it.

“So at that point I got mad, and stubborn, because here I’d run this cool idea by two of my most trusted people and they both were skeptical, and so I was like ‘I’m going to do this,’” Jackie recalls, with a laugh.

“So I sat down right then – past midnight in a motel room in Corpus Christi, TX, and I painted the first two. And I decided to donate the money to SF Suicide, in part to show my friend that I could do it my way!”

Jackie’s mother tried to purchase the first painting that went up for sale at 100unicycles.com, but she wasn’t fast enough and had to settle for #4. Jackie has painted 45 of the intended 100 so far, and with each donation, she sends a screenshot to her friend Mike to celebrate the sale of an original, not a reprint. “He puts up with me with grace,” she says. 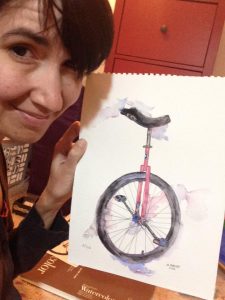 Jackie says she didn’t expect it to be so challenging to paint the unicycles, which are fairly simple and take only a couple of hours from start to finish. But she developed shoulder pain last year that sometimes keeps her from being able to work, and she experienced another mini-depression in early March. “Usually I only struggle with depression in the winter, but every year is different,” she says.

She also launched a second project, 100 Cupcakes, which raises money to end hunger, and she says she doesn’t think she was ready yet to handle so much work in addition to her regular responsibilities as a single mom and portrait artist.

“Even so, I feel enormous pride that I’ve come this far,” she says, having painted 45 in less than six months, not counting extras that were unnumbered. If it takes until December to do the rest, that’s OK too.

As for learning to ride the unicycle, that’s not going very well, she says. “The tire keeps deflating and I still haven’t bought a helmet or shin guards, and now the guy I borrowed it from wants it back. So I think I need to get my own, and maybe lessons!”

The unicycle project is dedicated “to all of those who, right now, can’t see how loved, needed, and worthy they truly are,” and Jackie says she hopes it will encourage people to get the help that they need.

“That’s why the charity donations are so important,” she says, noting that anyone purchasing a unicycle receives a confirmation letter of the donation from SF Suicide Prevention. “Real people are being touched and saved every day because of these paintings.”

To learn more about the project or view the available unicycle paintings, visit 100unicycles.com. For suicide prevention resources in your area or immediate help for you or a loved one, please visit the National Suicide Prevention Lifeline. The hotline number is 1-800-273-8255, and it’s available 24 hours a day, 7 days a week to connect individuals with trained counselors at a crisis center near them.

Welcome! If you’re new here and don’t want to miss a thing, or if you’d like to suggest someone to be featured, be sure to CLICK HERE TO SUBSCRIBE to the Faith & Sweat blog updates. Know a friend who would like this? Please share. Thanks for visiting!

Previous Post: « Stressed? An Introduction to Mindfulness
Next Post: Want a Sports Drink that Works as Hard as You Do? »