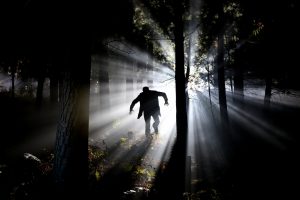 If I’m going to be running, something will be chasing me!

That used to be my saying. And then popcorn season came.

Popcorn season had been a big deal in our house for several years, and this was the first time that both boys were selling it. The eldest had been the top seller in years past, but this year little brother threatened to cut in on the sales.

We headed out, one boy on a bicycle, one on a scooter, and me trying to stay untangled beside two leashed dogs. One son claimed prospects on one side of the street, while the other took the opposite.

About 45 minutes into our quest and more than a mile from home, I noticed big, dark billowy clouds looming to the north and west. Oh, they’ll go around, I figured, and we pressed on, taking orders in our Kernel Kingdom. I noticed the sky again and wondered if those dark clouds were getting closer, or if I were imagining that. 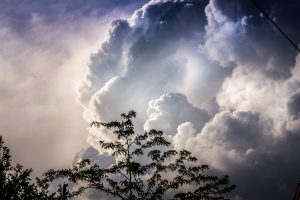 I thought to check the weather app on my phone. Apps were just taking off then, so it hadn’t occurred to me earlier. When I saw the amount of orange and red areas bearing down on us on the map, I knew we were in trouble.

“Operation Popcorn aborted. Go home as fast as you can NOW!” I shouted over the thunder now rolling in the distance. The bicycle and the scooter carried the boys away more quickly than I could go with two dogs, especially since one of them decided she couldn’t run and stopped in her tracks. As I ran toward home, one 20-pound dog in my arms, I called a neighbor who I had just passed us in her van minutes before. She agreed to come pick us up, and I kept running.

As the winds whipped tiny branches and twigs from the trees, the rain started pelting us, and our neighbor arrived for the rescue. Breathing hard and dripping wet, we all climbed into the van.

Later, safe and dry from the storm, I realized that I had run nearly a mile home.

If I’m going to be running, something will be chasing me.

That day, it was. It was lightning.

At the gym the next day, I decided to see how this running thing might work for me, and I attacked the treadmill as my warmup. After a few days of this, I decided a walk/run combo outside might be amusing, yet worth attempting. I would set milestones for myself: just run to that next mailbox before you walk; just go to the second light post this time.

Eventually, I signed up for my first event, a 4-mile run in my hometown, and I’ve since gone on to complete many races. It’s never been about finishing in the top of the pack. It’s always a race against myself, to push myself to do and be more than I thought I could. 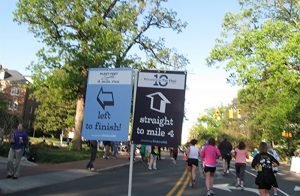 I am a runner. I’ve been chased by lightning. Are you next?

How have you surprised yourself lately? What have you said in your mind that you would never do? What would it take for you to develop a different picture of yourself, to tell yourself a different story?