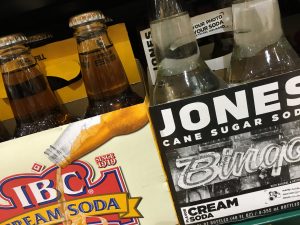 Anyone watching me at the grocery store and unaware of my inner turmoil would have thought that I was insane because of the dance I was doing with different cartons of the stuff.

I was getting ready for my son’s birthday party, and he had requested cream soda and Doritos to go along with the pizza they were having. (In my defense, I also served grapes!)

At the store, I first picked up the IBC brand, which I thought my son would prefer. Then I read the label, saw HFCS (high fructose corn syrup) as the first ingredient, and put it back on the shelf.  I next picked up Jones cream soda, made with cane sugar and selling for nearly twice the price, and put it in the cart. But then I thought about how many I would need to buy, did the mental math, and went back to the one with HFCS because of price.

I danced back and forth between shelf and cart at least two more times, debating each. Am I always this indecisive? Ummm, maybe?!

That’s what food producers hope we’ll do – park our brains where we pick up our shopping carts and just grab the cheapest or most easily recognized. It’s not just with sodas, either.

Americans’ intake of added sugar – both from natural and manufactured sources – has skyrocketed through the years, and so have our waistlines. I’m trying to decrease my family’s sugar intake, so I normally don’t buy sodas or even much juice. I try to limit cookies and other sweets in the house, because it’s easier to say no to it if it’s not in the pantry.

But aside from that fairly recent “we must consume less sugar” philosophy, I’ve believed for a long time that HFCS is bad for us, and I’ve tried to avoid it. There is great evidence that our body handles it differently than it does cane sugar. The two are not the same, and HFCS also is not the same as simple corn syrup – despite manufacturers’ claims.

The effects of HFCS are not good, with many reports that it causes body-wide inflammation and obesity, and a Princeton University study in 2010 finding that HFCS prompts more weight gain than simple sugar.

“When used in moderation it is a major cause of heart disease, obesity, cancer, dementia, liver failure, tooth decay, and more,” says Dr. Mark Hyman, MD, about HFCS in a detailed blog post that is well worth the read.

High fructose corn syrup also is in more food products than you suspect, from ketchup and salad dressings to crackers and cereals. Protect yourself and your family by reading all labels on processed foods.

I read the labels and still chose the item with HFCS this time, reasoning that if I’m going to let my kids and their friends eat crap, let’s just get it all done in one fell swoop and go with what’s cheaper.

The Doritos I didn’t even debate. They’re just terrible nutritionally and there was no other “healthier” option right beside those at the store. But given at least two choices of cream soda, I was in limbo.

The six-pack of IBC cream soda – with HFCS – cost $3.99. Comparatively, the four-pack of Jones, with the cane sugar, cost $4.99. At an allocation of two bottles per party-goer, I was spending $8 for the IBC, or $15 for the Jones. (Raise your hand if, once having given up the healthy ship, you would have bought a two-liter of the high-fructose corn syrup cream soda for $1.89 and called it a day? That stupidly didn’t occur to me until later.)

Later, I felt twinges of guilt as I watched my son and his friends drink what I had bought. I wish I had chosen the one laden with cane sugar and allocated only one per partygoer.  I even had circled back around to the soda aisle and repeated my dance with the cream soda again before heading to the checkout.

Worn out, in the end I simply caved.

So now I’m back to my “Do Not Buy at All” stance, no matter the price. If the cream soda with cane sugar doesn’t fit my budget, I will buy less, or none at all.

It’s time for me to stop dancing in the aisles.

Question: Have you given up high-fructose corn syrup? How hard has it been to do that? Where do you find it hardest to avoid?

Previous Post: « Can a Nutritional Deficiency Cause Modern Disease?
Next Post: 3 Quick, Personal Gifts You Can Pull Off Before Christmas »