Blogger Nicole Akers has written several times for the “Faith and Sweat” blog. When the FDA announced last week that it would be redefining 22-year-old definitions of “healthy,” we both jumped at the chance to comment. Here is Nicole’s take on the FDA’s news. My version is at her website. 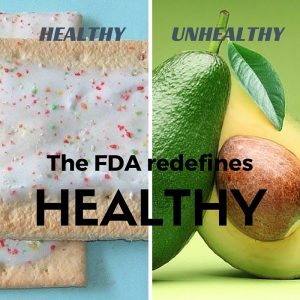 Remember the This is Your Brain on Drugs commercial series? Here’s a 30 second reminder: This is your brain on drugs. Any Questions? The FDA has taken one too many of its own approved drugs. Maybe it has eaten too much of its own approved food. Have you read The FDA is Killing Us? The FDA is about to change the menu again. It has scrambled eggs for brains, but it wants to be “healthy.” Has it gone Cuckoo for Cocoa Puffs and mixed up the labels again, or is it about to sort it all out?

It won’t end before “healthy” has a new definition, which could take a really long time, after all this is an arm of the government we’re talking about. The FDA’s final rule on gluten free labeling took more than 6 years to complete.

We define health every day with the choices we make. The fuel we put in our cars matters. We put diesel in a diesel engine. Unleaded goes in just about everything else. Going on a trip, or want a better performing engine? Go for premium. The fuel we put in our bodies is no different. If we want our bodies to perform we have to feed them good food. Good food is better fuel for optimal performance. And, if you don’t want optimal performance now, that might be okay when youth is on your side, but when your body starts to breakdown earlier than it should because you haven’t made good food choices you will wish to reconsider those decisions.

What food is healthy? Sometimes it is hard to tell, especially if you’re reading the packaging labels instead of the ingredient labels.

The FDA’s definition of “healthy” is under scrutiny and about to change, so let’s look to Merriam-Webster’s for something more sound.

And, there’s a whole conversation on the matter:

Healthy implies full strength and vigor as well as freedom from signs of disease <a healthy family>. Sound emphasizes the absence of disease, weakness, or malfunction <a sound heart>. Wholesome implies appearance and behavior indicating soundness and balance <a face with a wholesome glow>. robust implies the opposite of all that is delicate or sickly <a lively, robust little boy>. Hale applies particularly to robustness in old age <still hale at the age of eighty>. well implies merely freedom from disease or illness <she has never been a well person>.

The FDA definition might be about to include foods like avocados and salmon, Read more here: WSJ article.

Let me make sure I have that right.

Almonds have not been healthy, but they could be. Kind LLC cannot have “healthy” on its packaging. Now Pop-Tarts and fat free pudding cups can be “healthy,” but avocados are not because they have too much fat. Dieticians suggest a whole avocado is too much in a serving. A fifth of an avocado will do, and it supplies good fat, but Pop-Tarts have an overabundance of sugar, and can be healthy. Have you witnessed a child’s energy level after eating a Pop-Tart? They have to be on a teacher’s worst nightmare list for breakfast before school.

Even my husband is confused. He needed a snack to have during the day while at work.

“I almost bought Pop-Tarts instead of granola bars yesterday because Pop Tarts are both delicious and healthy.”

I am positive he was trying to get my goat, but the confusion is understandable.

The FDA is smart to designate varying levels for different food categories. Whew! At least that is good news.

“Healthy” was first defined in 1994, and you can read all the legalese about the Dietary Health and Education Act. Sugar wasn’t a big concern then, but the act still has good points worth keeping.

I get it. After more than 20 years the definition is too antiquated. Maybe the FDA should consult the urban dictionary for an update because by the time a finding is reached it could be outdated again.

Before an update we might want to look around to see how health in America affects other countries. In doing so China might have something to say.

China blames our gotta have it now and quick fast food lifestyle as part of its obesity problem. American restaurants like KFC, Taco Bell, and Pizza Hut thrive. Parent company Yum is opening fast food restaurants at a rapid pace. McDonald’s restaurants are on the rise too.

Fast food is high in saturated fat, simple carbohydrates, and sugar without a lot of nutrition. This sharply contrasts with traditional plant based protein, low cholesterol Chinese diets. Chinese youth are plagued with weight gain and chronic problems from fast food. China doesn’t want to cut corners on “healthy.” Droves of Chinese children flock to fast food restaurants and it doesn’t like how Western fast food affects its health. Twelve percent of children between the ages of 7 and 18 are overweight and 1.7 million children have diabetes.

A German study doesn’t like it much better. It blames Western food consumed more than twice a week for higher risks of diabetes and cardiovascular disease.In America 68.8% of adults are overweight. And, 35.7% of those are obese adults according to statistics. Should Americans be redefining “healthy?” The rest of the world may want to pass on the Western fast food lifestyle and the new “healthy.” They may want to see Westerners becoming “healthy” to match the definition the FDA hopes to embody.

Do you think the FDA is capable of getting it right? Want to place bets on how long it will take to bring a finding? Please do so in the comments.

Nicole is a healthy blogger who enjoys studying food. She welcomes followers of her blog @nicoleakers.com, on LinkedIn Nicole Akers, Twitter@Nicole Akers10, or on Medium.

Welcome to Amy’s blog, Faith & Sweat. If you’re new here and don’t want to miss a thing, be sure to CLICK HERE TO SUBSCRIBE to the Faith & Sweat blog updates.

Previous Post: « Heavy Load to Carry? Consider the Seashells
Next Post: What’s in Your Shopping Basket? (An Excerpt) »