For more than 20 years, National Adoption Month has been observed in November to raise awareness of children and teenagers in foster care who await permanent families. This month, as part of a periodic feature of someone exemplifying Faith & Sweat, meet the Turnure family. 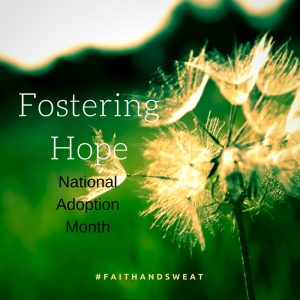 Janet and Doug Turnure’s journey to becoming foster and adoptive parents began while taking a family walk on a summer day.

Dandelions lined the path, and the Turnures’ three children blew fluff into the air.

They wished aloud for a little sister.

Martha Ann, who then was 4, was outnumbered, the children reasoned. Brothers DJ and Stephen were 5 and 2.

The children may have sewn dandelion seeds that day, but they also helped re-germinate a seed of adoption in their parents’ minds.

After that walk, the Turnures started making connections. A friend in DJ’s kindergarten class had been adopted through foster care. Other conversations developed.

Visit your state’s foster-care website, and you will find the photos and stories of hundreds of children in foster care, awaiting adoption. An estimated 100,000 children and youth want to find their permanent families, according to the Children’s Action Network.

Janet says that she and Doug, who have been married for 25 years, recognize that they can help a child as they are able, and God takes it from there.

“Do for one what you wish you could do for all,” she says, quoting their pastor, Andy Stanley, senior pastor of North Point Community Church in metro Atlanta.

The Turnures, who lived in the Seattle area at the time, completed their classes, visits, and other requirements less than eight months after their family walk, and they were licensed in Washington state as a foster family.  Some placements have been short term; others longer. They’ve provided a temporary home for youth as old as 15, as well as infants, and siblings as well as solos.

One sibling set in foster care– a 2-year-old girl and a six-month old girl – were available for adoption, but the girls had been abused, and caseworkers were not sure to what extent. Janet and Doug spent a weekend taking turns praying for discernment and each other.

“I’m all heart,” says Janet. “There’s no head in my game whatsoever. Doug is all head. We felt like God had equipped us, and we knew we could help them.” But in the end, despite not knowing where the girls would end up, the Turnures decided they were being led to say no. They knew that God would have another role for them.

Less than a week later, they met a 10-month-old girl and fell in love. The Turnures hoped to adopt her and were approved. But at the last minute, the state gave the girl’s mother another chance, and then the Turnures discovered that they were moving to Georgia.

They decided to obtain their fostering license in Georgia, too, in case the situation changed for the little girl they call B. Even after the move, the Turnures made monthly trips to Seattle to see B, and they still keep in touch.

But because it didn’t work out for them to adopt B, they were able to take in other foster children in Georgia. And then they received a call about taking in a newborn boy.

“It’s awesome to see how present God has been through all of it,” Janet says. Losing B allowed them to pick up Zac from the hospital, and this past summer, the Turnures adopted him.

Zac is 2, and his nearly 1-year-old sister is in foster care and also living with them right now.

“The kids say yes (to placements) more than I say yes,” Janet says with a laugh. “We’ve had 26 really, really good kids. A half-dozen are really hard kids, diamonds in the rough.” But they stay in touch with many of them, even the “hardest” one, who was reunited with his mother.

Janet says she doesn’t know how long they will continue fostering but that they still feel called to it.

“I have the mindset that everybody can do it,” she says. “But I’m not bold enough to say that everyone should do it – because it is a calling.”

So many people seem to overthink it, she adds, saying that she’s been asked questions from potential foster parents that never crossed her mind to ask. “I’m not sure if I were naïve,” she says. “We just put one foot in front of the other.”

She encourages others to consider the idea. Foster families don’t have to take long-term placements, and people also can help without becoming foster parents. Families need respite care sometimes so that parents can take a break from daily demands. Depending on the need of the family, a volunteer could help drive a teen to an activity or fill some other role.

Many churches now have groups that work with fostering connections, but if those are not readily available, often simply a call to a local Division of Family and Child Services office can start the process to help foster children and families.

“There’s tons of ways to help, depending on what your heart is,” Janet says. “I’m so grateful for what we’ve learned through it.”

Have you had experience with foster care or adoption? What’s your story? Comment below, or join our free “Faith and Sweat” Facebook group, where we can have a conversation.

Welcome! If you’re new here and don’t want to miss a thing, be sure to CLICK HERE TO SUBSCRIBE to the Faith & Sweat blog updates. Know a friend who would like this? Please share. Thanks for visiting! 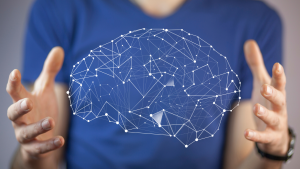 Of every three people in the United States living with Alzheimer’s, two are women. And, even factoring in women’s longer lifespans, they’re twice as likely as men to develop the disease. But a recent poll indicated that many women don’t know about their elevated risk, nor what they can do to reduce it. It’s time […]

"You can never change just one behavior. Our behav

Still thinking about the conversations, ideas, and