Barlet Wilbert’s hope chest, like that of most mothers, is filled with items that parents keep from their children’s early years – a plaster mold imprint of baby’s hand, the outfit the newborn wore home from the hospital, a special dress worn on Easter.

But her chest also holds items that no parent wishes they owned or wanted to hold on to – page after page of entries from her eldest daughter’s CarePages.com profile, and cassette tape recordings of the toddler’s funeral.

Leah Elizabeth would have been 11 this year.

At 8 weeks old, Leah started having difficulty breathing. Her grandmother pointed out how she seemed to sleep more than most babies; in fact,almost all the time. The new parents feared that Leah had asthma and took her to the emergency room. A blood test revealed that she had 1.2 million white blood cells, and almost no red ones. A normal white-cell count it 10,000. Leah and her mother were loaded into an ambulance and sent straight to St. Christopher’s Hospital for Children, in Philadelphia, for an official diagnosis and a plan.

It was the July Fourth weekend, 2005. Because of the holiday, the hospital was full, and doctors were in short supply. The anxious parents had to sleep the first night on a twin bed crammed into a janitor’s closet, and it took a couple of days to get all their questions answered. 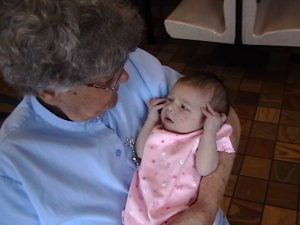 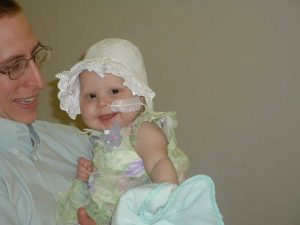 Her next 11 weeks were spent in the pediatric oncology unit, receiving chemotherapy. Afterward, able to receive care as an outpatient, she celebrated her first Christmas at home. But if she developed even the slightest fever – with basically no immune system – her parents had to take her directly back to the hospital.

Leah had a few relapses, and not long after her first birthday, she had a bone marrow transplant. It was prefaced with three days of total body radiation to prepare for the transplant. But a side effect of the transplant is a liver disorder, which Leah developed. Her liver started shutting down.

Less than a month after the transplant, Leah died.

The Wilbert house is filled with photographs of her, smiling in nearly every one. Her memory still is very much part of their lives. Her sisters, now 8 and almost 5, were born after Leah lived, but they know of and talk about her in age-appropriate ways. Barlet created a small photo book about Leah’s life, and the family observes Leah’s birthday in May and her death in July.

“I don’t want them to forget Leah,” says Barlet, “and I want them to look forward to meeting her one day in heaven.”

It would be easy to ask why. Why did this have to happen?

Barlet knows the questions all too well. While the experience was not a good one, she says, and while you never would want others to have to go through something like it, it’s impossible not to appreciate the value gained from it.

Maybe it helped prepare her for her occupation, working with children who have special needs and their parents who are dealing with difficult situations. When one of her patients died in the past year, Barlet found herself helping the grieving mother. She could understand the pain.

Friendships developed that might not have otherwise. People reached out to God through prayer on Leah’s behalf. And family and friends spent 14 months with a smiling, precious little girl who left a lifelong imprint on their hearts.

“There were thousands of people praying for my child,” she says. “Maybe that was Leah’s role – to bring people closer to God.”

Welcome. I’m glad you’ve visited. If you’re new here and don’t want to miss a thing, be sure to CLICK HERE TO SUBSCRIBE to the Faith & Sweat blog updates.

Previous Post: « Make Your Own: A Healthy Take on the Shamrock Shake
Next Post: You are Awesome: A Manifesto »