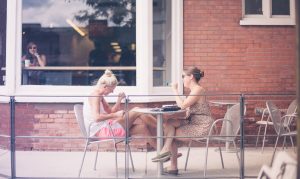 Deep inside, we all want to be heard and valued for who we are.

We want to express ourselves.

And we do not want to be judged.

But how often does that happen?

Awareness of the Need to be Heard

Last fall, I volunteered at the Unity Project hosted by my church, which fronts a busy street at the edge of a university campus. So when a stranger walked toward me from the sidewalk, curious to see why magenta yarn formed a web between tall poles on the church’s front lawn, I greeted him.

At the base of each pole, a sign presented a different identifier. Many of them began with “I am” declarations.

I am: a parent, a student, single. 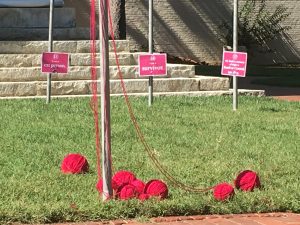 The man silently looked around at all 32 identifying signs.

I explained that participants could wrap a strand of yarn around each descriptor that they felt reflected their identity. Each strand intertwined and showed the strength that comes from diversity. 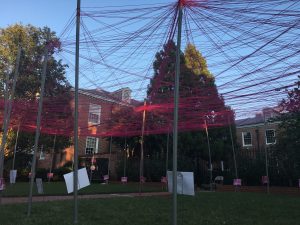 The man’s gaze stopped at one sign, with many strands of yarn wrapped around its pole: I am pro-choice.

“That’s a lot of people who want to kill babies,” he said. “I don’t know why a church would support people wanting to kill babies.”

Letting his words sink in, I replied that the project wasn’t about taking sides on any issue. So, I asked, did he want to wrap yarn around any of the poles, including the one that declared: I am pro-life?

He declined and added, “I just don’t know why people want to kill babies.”

Taking a breath, I replied softly with what first came to mind.

Then the man looked at me for the first time, and we held each other’s gaze for a second. He nodded, then turned and walked back toward the street without another word.

Since then, I’ve thought about our encounter many times.

I don’t know the answers to those questions.

What stuck with me, though, is the power that he and I both found in three words woven together: I hear you.

Being Heard as a Surprise

When I enrolled in the professional health coach training program at Duke Integrative Medicine this year, I received an unexpected gift. I expected to learn head knowledge – the skills and information I could use in working with others to help them make behavioral-health changes.

But I didn’t expect the heart knowledge that I learned in the program, nor my own personal transformation.

Mindful awareness – the practice of paying attention in the moment, without judgment to what arises – undergirds the health coaching process taught at Duke IM.  I analyzed myself on the Wheel of Health, and I discovered where I wanted to improve.

So with mindful awareness as our foundation, we took turns being coach, client, and observer.

And in that role as client, I discovered coaches – both the master-certified coaches who led the training and the peer coaches who were as new to the process as I – willing to be present with me. They listened to my struggles without judgment and celebrated my victories.

But most of all, they didn’t judge nor try to fix me. They trusted the process, and they believed that I held my own answers.