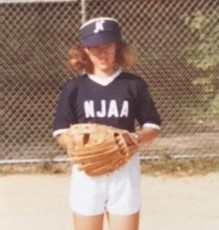 Like many little kids, I played sports through local youth recreation leagues. Some of my favorite memories formed on a softball field.

And because the coach never sent me to right field (thanks, Dad!) and I made some key plays, I thought I must be a pretty good fielder. I was a decent hitter. But when it came to my base running, I never doubted my speed.

Then, my sophomore year of high school, I showed up for tryouts for the school softball team. There, not only was my lack of speed glaring, the rest of my limited abilities were magnified, as I played with and against others who were more skilled, talented, prepared.

I don’t remember the coach making cuts that year, which is probably the only reason I made the team. Second-string. As backup catcher, my main duties were to warm up our pitcher while our primary catcher put on her gear between innings.

We practiced daily during the season, and I was part of a team that played well together, improved, and ultimately won the conference championship. But personally, I didn’t improve much throughout the season. And it was all because of me.

What kept me down?

I simply didn’t make the connection then between the amount of effort I put in away from the field and the personal success I had on the field. In the off-season, I never practiced nor conditioned. And outside of team practices and games, I rarely played or practiced on my own.

I didn’t put in the time, because limiting beliefs formed my foundation.

I lack talent. My teammates are more athletic. They are more skilled. I’m slow. I’ll always be slow. Nothing will change that.

Those were the messages I told myself.

So several years ago when I first became a runner, I found myself repeating some of those same beliefs.

I’ve always been a slow runner and that won’t change. But I will finish, even if it means walking some of it. Speed I cannot control. Finishing, I can.

You know what else happened, though, because I kept pushing myself?

My speed kept improving little by little. I was amazed, truly. Even as an adult, I still was buying into the idea that athletic ability was innate, and that I would forever be slow.

I began to wonder, what other limiting beliefs do I have? How else have my thoughts held me back?

Maybe you wonder about that, too.

What keeps you down?

How often do we tell a story about ourselves, and then keep repeating that same story until it becomes our reality? And how often do we meet an obstacle and stop before we truly get started, giving up before we seek to be our very best?

My days of playing softball ended long ago, but each day that I try something new and my self-doubt starts creeping in now, I remember how I used to believe I could never get faster.

I gave up playing a sport I enjoyed because I told myself stories that weren’t completely true. Letting my self-doubt and insecurity stop me, I didn’t do anything different or put in the effort.

What limiting beliefs do you have about yourself? How are they getting in the way of what you want in life, and for your health? What’s the best outcome you can imagine?

And what stories do you need to rewrite to get yourself there?

Amy Hoogervorst offers grace and space for a healthier you as a national board-certified health and wellness coach. If you’re ready to shift your mindset and fit new habits into your life for more energy, focus, and fun, schedule a free discovery call here to learn more about how health coaching might benefit you.

Previous Post: « My Journey Through A 3-Day Cleanse
Next Post: Make Your Own: A Healthy Take on the Shamrock Shake »